Huh? It’s Wednesday already? What happened to Monday and Tuesday? Haha! The passing time is really getting on my nerves!!!

I actually know what happened last two days. I woke up, get to work, go home and chat with my friends about the Chiong Murder Case. Tuesday was the same. The documentary “Give Up Tomorrow” really hit the sensibilities of the people in social media. I know there are a lot of things going on in our country: extra-judicial killings per se but I guess, people now realize that weight of being wrongly convicted. In the case of Paco, its already 21 years and its still counting. Who won’t be afraid. ? Having talked with people who believe he is innocent and guilty, having read the commentaries and Supreme Court files, I think I am ready to release my own verdict soon.

Here’s the documentary aka horror story. Try watching it and ask yourself. Is Paco really innocent? Does he deserve death penalty?

But for the mean time, what happened today was this

1. I WAS NOT FEELING WELL and I stayed in the dorm all day. I edited my pictures from Luljetta Hanging Gardens and my album in our Levitation Photography Session. This is the result of my edit for today. 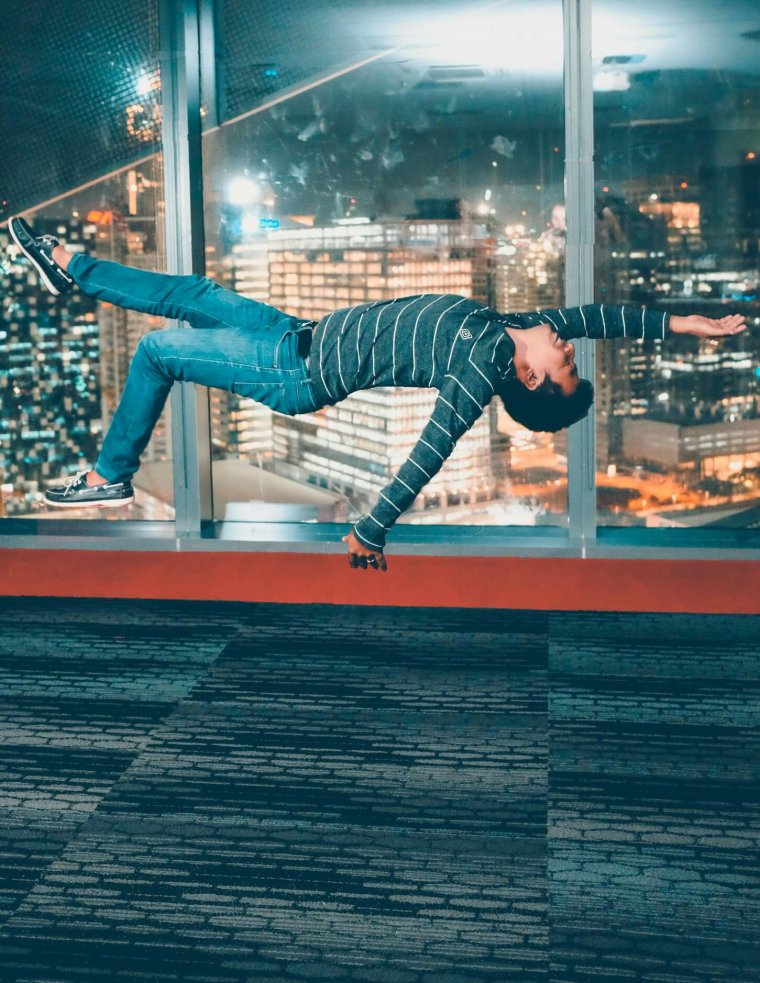 Obviously, levitation photography is a technique that will make the subject look he’s floating on air. Our model in this picture was an officemate. He’s our videographer actually but can pass as a model as you can see! Haha! This photoshoot was done last month. Talk about procrastination! Ahahaha!

Woah! It’s Thursday already? Seriously are you kidding me?

Nothing much has happened today. As usual I went to work. It was raining all day. We can see outside through the glass walls and damn there was 0 visibility. I was supposed to attend a photography seminar and yet again, I would not dare to deal the Edsa traffic because of the rain. And besides I got an issue to solve.

Yesterday I was absent right? Now my office mates are jokingly asking me what happened to my “job interview” yesterday. I told them I really did not feel well and I stayed in my room. So they concluded that I just had a Skype interview then hahah! They don’t really believe me haha!

My friends and I did not talk about Paco anymore. Yesterday we discussed that we should move on already. Whether or not the allegations are true, nothing will happen if the case would not be re-opened. Major tv station seems not to mind the chaos happening in social media. They used to catch the latest thing but they seem eerily silent about it. Hmmm.. Meanwhile the reviews for “Jacqueline Comes Home” finally arrived and all of them are saying its a trash movie. That it did not portray even the Chiong side accurately. But well, movie is really like that right?

I went home, ate my dinner then open my laptop to continue my levitation photography editing. I’ll be sharing the full set soon in another post. For now, I’ll be sharing a silhouette photo that I also took during the same session. I edited this in Adobe Lightroom using Rufosque preset. 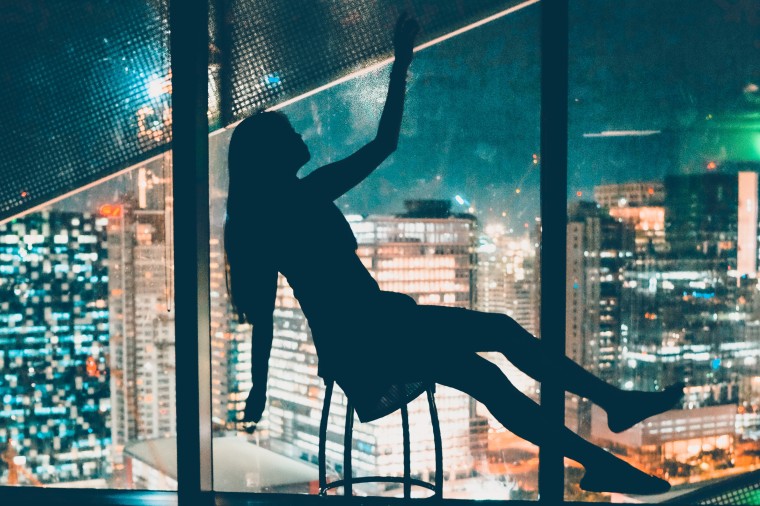 It’s 2 am already. I’m still awake and awfully hungry. I’ll grab something to eat then hit the sack! I predict I’ll be having a hard time waking up tomorrow and regret that I did not sleep early. Hahahahah!

6. IT’S LATE AGAIN. 1:11 am. But the great thing is its Saturday tomorrow. I wonder how long my sleep for tonight.

As expected, I woke up at around 1pm. This is way past breakfast and even late for lunch. But I deserve all this sleep. I don’t feel guilty. But still, I could warp my body clock a bit. Nothing beats waking up early and getting lot of shits done before lunch.

Suppose to be, today I have a reunion outing to attend. But because of the weather and bad flood, it was cancelled. Good thing because this weather is making me feeling lazy for adventures.

I decided to take the first meal of the day in a nearby cafe’.

I have paid the bill when a mysterious song began. I can’t grasp the lyrics but the melody is so sweet and romantic. I pictured myself suddenly in a middle of a night, slow-dancing with a tall man. It was not sark becausethe night was clear and there are fireflies flying and dancing around us. I must find that song!

I was about to record some bits of the song for later research when it faded away and replaced by a Katy Perry song. I approached the staff of the cafe’ and ask what was the song. He said he did not notice or aware what the song was before katy pery. And also the pkaylist was shuffled in spotify. We looked at rhe playlist so we could figured it out. I even hummed the tune to narrow down the choices. We played two songs before the mystery was sokved! I took a photo of the screen to take a note of the title. It was Flightless Bird, American Mouth by Iron & Wine. Hmm the title sounds interesting

I bid goodbye to that helpful staff.

After that I packed my things and booked a trip to Glorietta mall. I need to do some errands related to ny finance then have to do some shopping.

I am lucky that viral pianist grandpa was here at the mall. 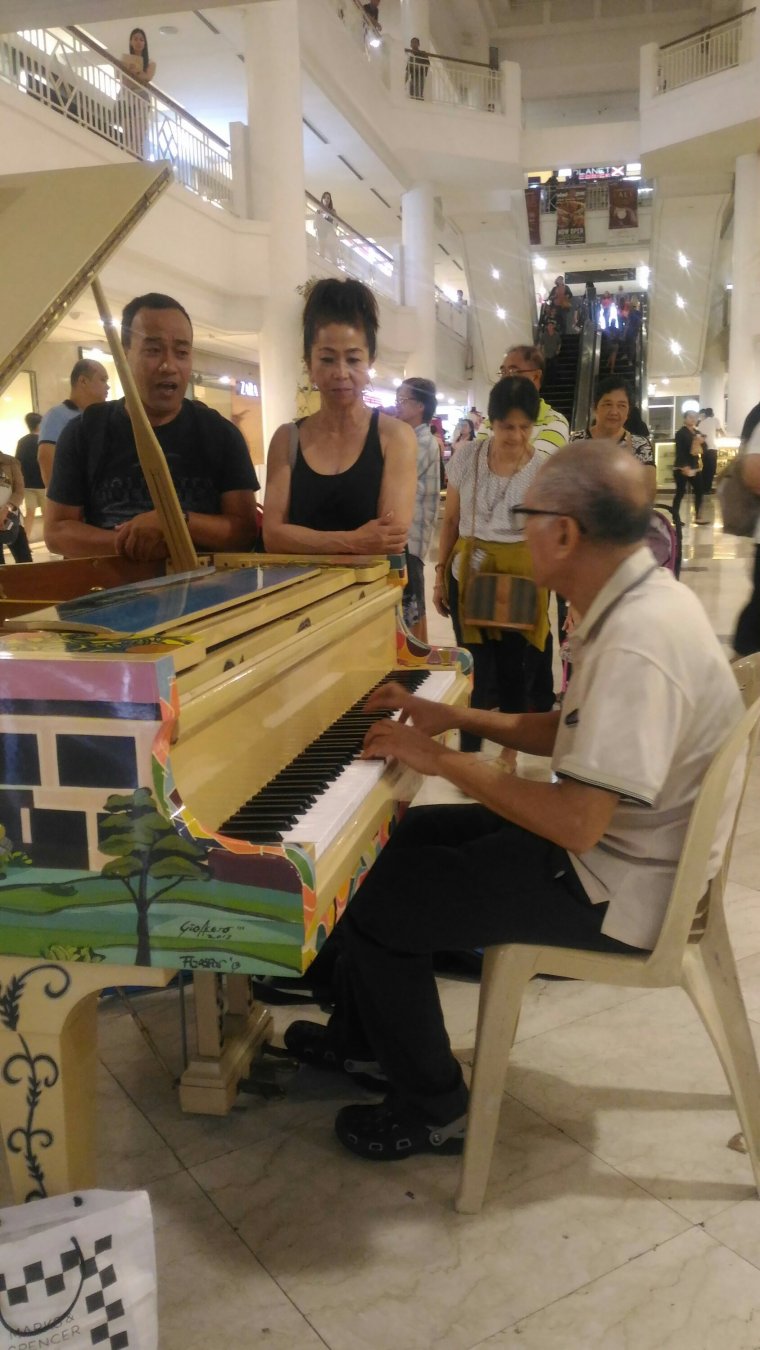 I saw him in Facebook already because some appreciative audience uploaded his video and it went viral. Lolo is like a casual mall visitor. It happens that there is a piano display  which is free for anyone to play with and he decided to take the sit. After that, he visits here more often. Lolo is not only good but full of energy in his performances. One could not help but sing. He’s so approachable and even accepts requests. Now, he enjoys playing this piano regularly and everyone can now support him by giving money in his small “Marks and Spencer” bag beside the piano. I won’t mind because he gives performances nothing short of spectacular.

Of course I can’t let this moment pass by without my own recording of this Amazing Granpa…and some of my singing too with bits of “yehey” and “wow”.

I think I finished three songs before I moved on. I have to buy new bb cream, lipstick and some toiletries. I also in the mood for new clothes. I alot monthly budget for that.

This me in the fitting room with the blazer I ended up not buying.

I finished my shopping with a small time hang-out in Starbucks. It was not in my plan but the the rain was heavy and my mobile phone battery was almost drained. I charged it in Starbucks while I drink another cup of hot coffee. After that I booked a ride back to my original home.

My sister and mother were having dinner when I arrived. My sister immediately ransacked my shopping paper bag . They teased me because I bought new lipstick again!!! My sister opened it and applied the lippie immediately. She liked it.

While upstairs, my sister and I talked about random funny things we saw in the internet. I opened my laptop and researched about that mysterious song that captivated me today. I also made my sister listen to it. To my surprise, the song lyrics looks like it is not a love song at all. The lyrics doesn’t even make sense if you don’t spend time thinking deeper about it. It’s deep. One can have its own interpretation. Where it is a love song or not, it’s up to you.

Here’ s a lyric video. Another trivia, its part of the OST of Twilight movie series. I’m not a fan that’s why I don’t know.

I got an interesting interpretation of this song from songmeanings.com

IMO, there are dual, yet similar, themes running through this song: (1) an individual’s loss of innocence/idealism; and (2) the degradation/dissolution of the mythical “American” dream.

The first verse sets our protagonist as an innocent child (quick, wet, diving too deep) – newly born, baptized, full of energy/enthusiasm, carefree. We get a glimpse of what’s to come through the “blind” eyes of the adult world whom the child can already see seem focused on material things (“plastic toys”). The “cops” (his own adulthood) crash the party and he’s forced to grow up and give up his pure youthful enjoyment of life (cut his baby hair). Thus, he begins his quest to find his meaning/life in this adult American landscape. For me, it also brings to mind the end of the idealism of the peace/protest movement of the late 60’s…the system crushes the uprising…the hippies cut their hair…and wander off…going on to what?

Well, the second verse tells us exactly where our protagonist’s journey has landed him…a big fat safe spot with the adults of his youth. He’s achieved the “American Dream”, or has he? Now all talk and no action. He curses himself and the wrong/injustice he sees around him, yet he idly sits and watches these “poison rats” (the establishment, big business, corrupt government) slither by and destroy his ideal world. He bides his time in his magazines, finding pleasure in viewing some advertisement of folks fishing in some idyllic river. He is not out there himself, but even if he was, he would be merely pillaging/ruining/sacrificing a place of nature (“blood of christ mountain stream”).

How about you? What could you interpret with this song? I would really love to know!

I got a lot of things to say today. I think today was productive. But damn I was not able to sleep properly last night. I think I’m not used to sleeping in my original home anymore. I went back early to my dormitory because I badly needed sleep. It’s 9:54pm now as I write this. I want to write more but my body needed rest. By the way, I have done some editing and uploaded it in Facebook. Here are they.

I also did a capsule review of Marugame Noodles. I decided not to write a separate wordpress blog post for the mean time  because my mobile photography was not so good. I did not do justice to a great-tasting food.

And I haven’t shared my the full output of my Levitation Photography edits. Here it is, uploaded since yesterday. I’ll be writing a separate blog post of my editing photography and editing process for this. Check it out soon! And please follow my Facebook page Gurezu Blog too!

That’s all for now. I’ll be sleeping before 10 pm for the first time in many moons. Is this the start of a new life from being night owl to morning person? Let’s see!!!