No doubt, I was able to spot this resort due to viral facebook posts. They were able to replicate the bird’s nest, the swing and other fixtures that I often see to almost all tourist who went to Indonesia. And the photos were really great! So when a friend from abroad came home and we needed a short getaway together, this resort easily won as a suggestion. Here are some important details and my final verdict in this resort. 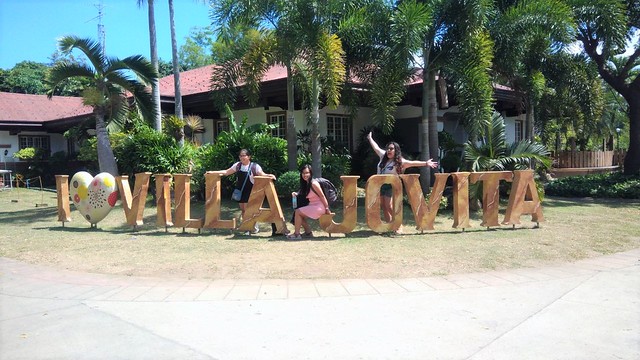 It was fairly easy. We just sent a message to Villa Jovita facebook page and asked for the rates of overnight rooms. At the time of our trip, only Nipa Hut Rooms are available.  To reserve the room, we need to send the following details and eventually deposit P500.00 thru their BDO account within 2 days of confirming our interest to book. The rest can be paid upon checking in.

No. of Guests: Accommodation:

It was easy to commute too. All it takes is a bus and a tricycle. Back and forth.

We got a  KUBO for 2-3 persons for the price of P3000. We were four in the group but they allowed it since they think we would still fit in there. It has two bedrooms, one was an ordinary room, one was a mezzanine type room which was quite small. They provide two electric fans. It has no own C.R. 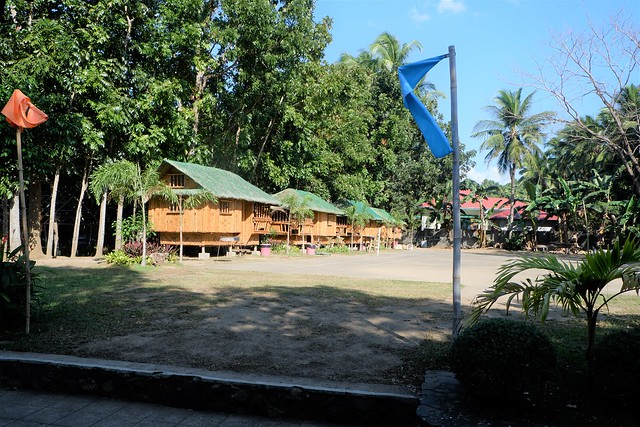 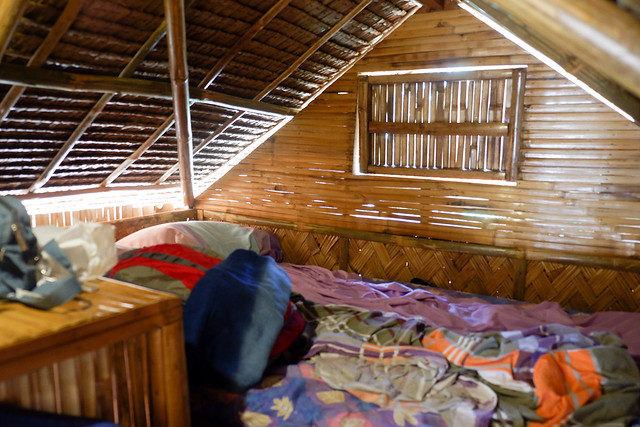 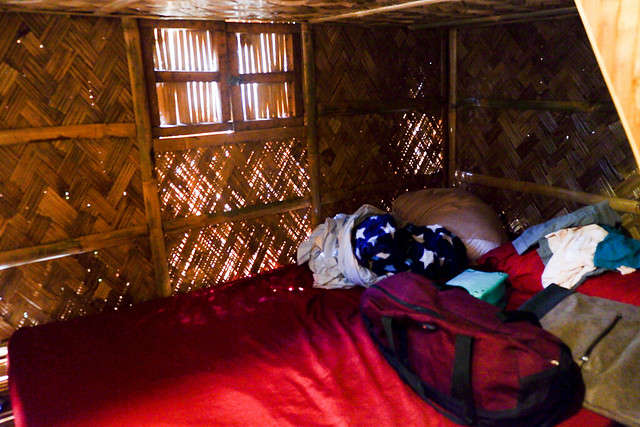 It comes with  bedding and blankets. However, the towels were by request. There were  no free shampoos and soap. So remember to bring them.

I love their adobo binalot! I ordered it as dinner and breakfast. They also have silog meals, cup noodles and frappe. 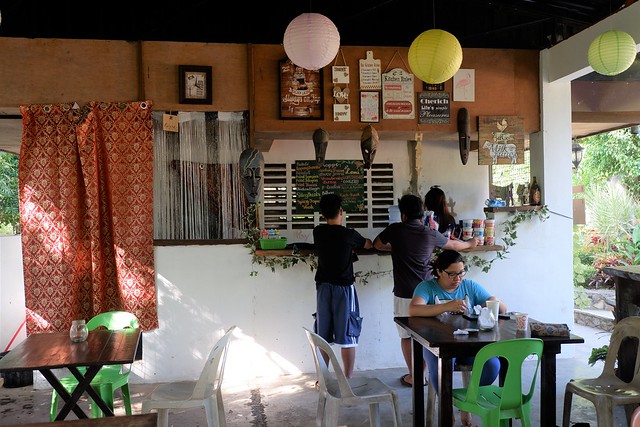 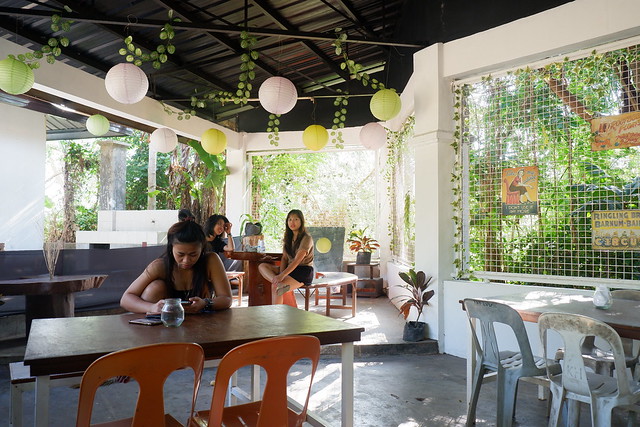 Of course, we came here for their highlight feature and took a lot of pictures.  Here are the outputs. This would show a glimpse of the things you can see here. 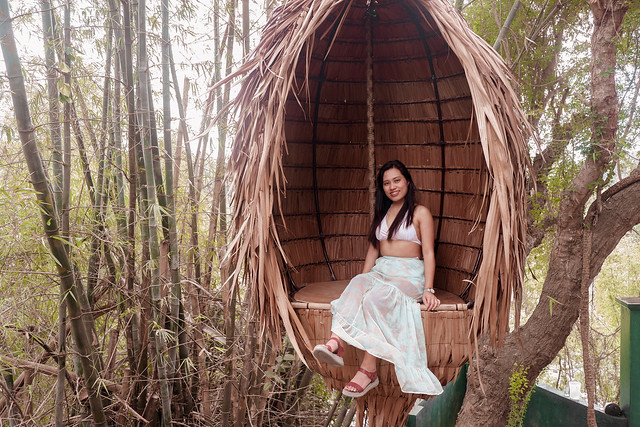 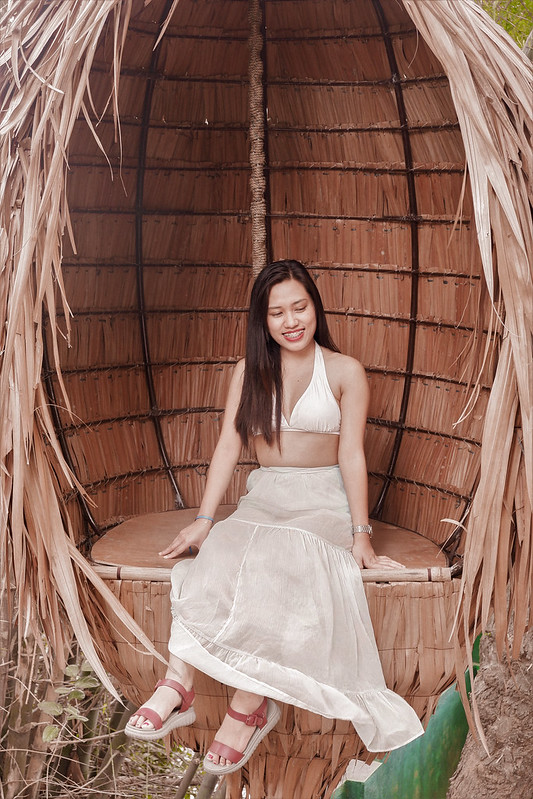 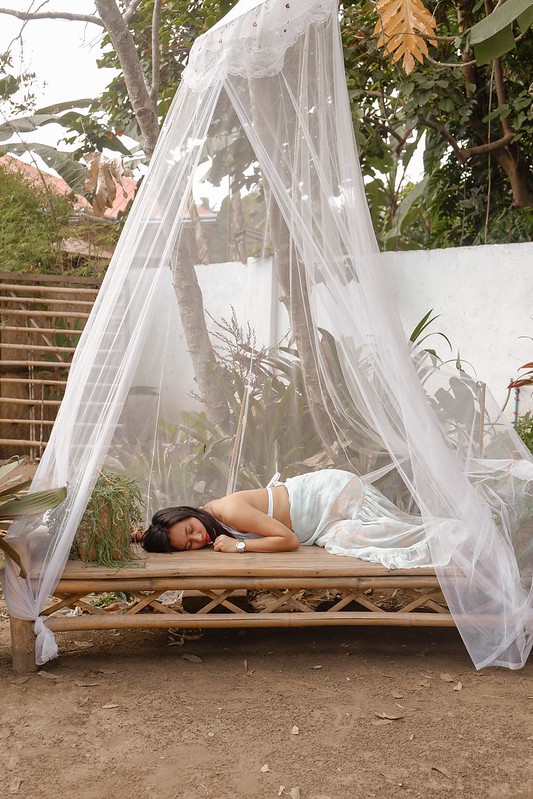 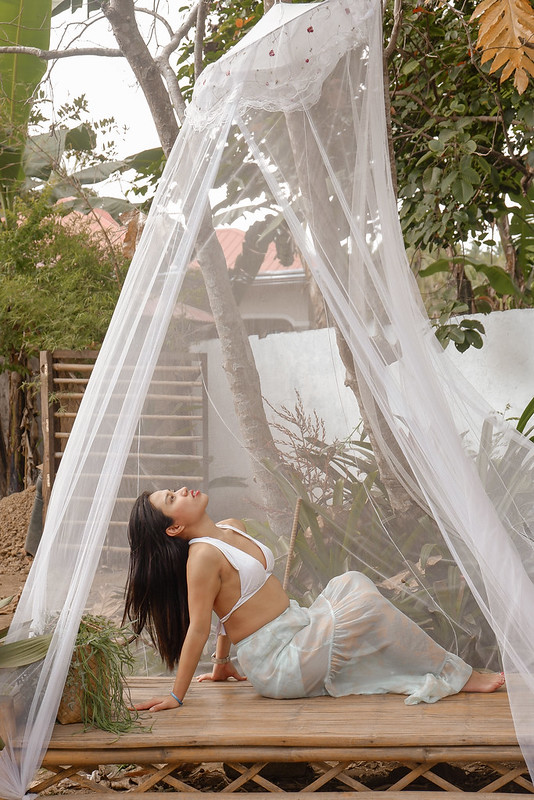 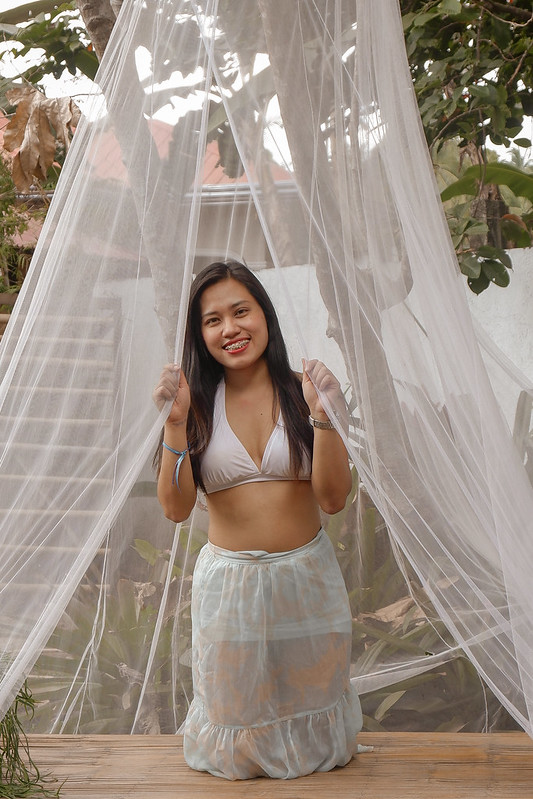 I didn’t avail the photoshoot rates since the photos are non-formal and for fun. But since I saw debut photos in their fb page, I asked anyway.

This is not the only pools available. They have a pool with a slide but I was not able to take photos on that one.

This is what I least like I suppose. I guess since this resort is popular and given the price, I expected something more. There is no any mirror in it where they could have easily install it with the big space in the sink area. There is only three shower area and one of them is not functioning. But their toilet has bidet so they got points for that. Overall, I won’t say it’s super dirty but it’s not that clean either. Their CR needs upgrading.

❤️ What I like: the Bali Corner is really great for photoshoots and play-pretend you were in Indonesia. I also like that someone is closely monitoring the people in there for safety. I seriously love their binalot available in the restaurant. I also like their riverside pools because of the relaxing nature views. Additionally, It’s near Manila and easy to locate.

😠What I don’t like: They seriously need to upgrade their CR. I think with the overnight fee for the Kubo (P3000.00), they should have at least provided free shampoos or soap just like other resorts.

Hope you enjoy my another travel blog. It’s been more than a month since my last blog. February was a busy month for me and I got a lot of stories to tell. I hope my mind and hands could catch up!

You are all awesome,

You know the popular woes of adult friendships; you rarely see each other. And if you all do discuss it, your schedules are all conflict with each other. For months, my college tropa has been planning to travel again. It’s been years since our last getaway. And we’ve been going on cycles, suggesting, turning down, screwing up the whole plan. It was truly difficult to reach the concensus. But amazingly (finally!) , we all agreed  on May 5, 2018  (except for one with totally reasonable reason) Since we could not travel far because of other commitments, we just chose to have staycation just few hours away from Manila.  So I browsed Airbnb and found these amazing condo unit with panoramic view of Taal.

With the free wi-fi and parking, we’re solved!  It accepts a maximum of 6 persons. Of course there are other units in Wind Residences with this great view. But this is the one I have found in Airbnb and we settled because of the freebies and reasonable price.

So this is the glimpse of the Taal just right at the window. It is absolutely panoramic!

Doing some night long exposure shots. I tried my best.

The condo unit itself truly delivers. It has appliances for light cooking. There was TV with HDMI cable for gaming, chandeliers and bed. The host was quick to respond to all our inquiries.   The only thing I could complain is it only has two towels and two blankets. They mentioned it beforehand but it is easy to slip in our minds. Anyway if you plan to book this yourself, just don’t forget to bring  extra towels and blankets if you are more than two people. But generally, this condo unit ROCKS!  I totally recommend it for those who are planning to have a chill and relaxing weekend.

As for the evidence on how the condo unit looks and how much we enjoyed our stay, please refer to the following section.

MY CRAZY COLLEGE FRIENDS  and THE FUN THINGS WE DID

Being with them is ALWAYS guaranteed fun-filled and full of laughter ride. I mean just look at this. They are all meme-worthy.

(NSFW guys. Just for fun only)

Upon arrival, we checked it and head-off  to the nearest supermarket just walking distance from the condo unit. Apart from necessities, we bought bottles of Soju, Renato (leftmost side guy) had a sudden penchant for Soju eversince I treated them in Oppa Chicken for my last birthday. It amazes me that he really became into it.

And some portrait photoshoot on the side

Photoshoot with Taal Volcano. Of course I didn’t let this moment slip without capturing the majestic view. I imagine how it feels like to wake up in the morning with this kind of sightings. But  then again, I realized that if you are used to something, even how beautiful it is, you would  get tired eventually. People are just like that.

This is becoming the banner activity of our friendship everytime we meet. It’s fun and you put down your phones because you got to really interact with each other. We played two games that night. First was the dead of winter wherein you as players are going to do your best to survive a zombie apocalypse together. It’s not a simple game. But I want to commend our game master Aldrich (below) for patiently explaining everything for almost one hour!

He’s been our ever reliable game master. No one could replace him and no one would be willing. (Gahd ang hirap kaya mag-aral ng game. Daming pag-aaralang instruction. I can’t for a life of me!)

The second game was Avalon. It is our most favorite so far. It’s a game of Bad guys a.k.a “Minions of Mordred” and Good guys a.k.a “Loyal Servant of Arthur”. In this game you should have an ability to deceive or investigate the behavior of your co-players. It is truly a fun game and its not hard to learn.

It’s been a long time plan to document and edit a reality-game show type coverage of us playing this game. But it’s not easy to edit. And I’m still struggling. But for now, here’s the glimpse of us playing as the bad guys caught in camera standing on a tripod.

Just one ride away from Wind Residences is a restaurant called “Green ATS”. You can choose in a “kubo” where there is a great skyscraper view of Tagaytay City. You just have to pay 1500 but that is totally consumable to food. And whenever we go to Tagaytay, our table won’t be complete without Bulalo. The food is great but nothing compared with the Bulalo in Mahogany also here in Tagaytay.

Even I was surprised with this birthday surprise. I was not part of the plan. We were playing “Just dance” when Renato suddenly said that he forgot something and he had to go back to the car. He disappeared for almost half an hour. When he went back, he already has the cake. Even I was stunned. I really didn’t know.  I guess they know I’m not a good actress and it would be hard for me to keep the plan hhahaha. I won’t blame them. I’m a girl with unrestrained secrets haha!

Finally soju time. Renato has been waiting for this

Apparently, Drich and Leonard has this amazing gaming console  called Switch. It looks like this.

When you connect to a T.V with HDMI, you can instantly play any games offline or online. I am really not much into gaming that’s why I don’t things like this. But if I have to choose a game, that has to be a dancing game! I love to dance. It’s a hobby that I love that doesn’t love me back. In a very rare occasion, all of us get up and join the game. So here it is, sharing with you our shameful dancing in the tune of 24K Magic by Bruno Mars.

And the best dancer goes to… The birthday boy, Leonard!

But allow me to display this meme-able gif again.

Allow me to introduce you the party mother of our group, Chard. He cooked, cleaned and washed the dishes all by himself. He woke up early  just to prepare the breakfast. When we got-up, everything was on the table already; hard-boiled eggs, tuna, pancit-canton, sausage and juice. See? It’s truly a blessing to have a friend like Chard.

Swimming at  the Wind Residences Clubhouse

This is exclusive in the accommodation. It only costs P150.00 each in the accounting center.

Because we were afraid of the sun, we opted to swim in the indoor pool.

Renato has small drone that he was afraid to fly unto the  hole of Taal Volcano. So we just tried around the Wind Residences clubhouse.

Exactly 12 PM we checked-out of the condo unit. We had our lunch at the place called Mahogany. There is a string of carinderia style restaurants here. Among of all these is the one featured in Kris TV because of its heaven-sent Bulalo. And not only Bulalo, but also “Crispy Tawilis”. I’ll be writing a separate blog about this soon. Just writing this triggers drooling for me and I’m writing this here in the office with Tagaytay like temperature. OMG! Help!

Now that I’m finished documenting our mini escapade, I realized that I have new names for my friends; Renato is the “Soju Boy”, Aldrich is “The Game Master” , Leonard as “the Dancer” and Richard as “the Party Mother”. I was thinking what is my role in this group. But since I documented everything,  I guess I’ll be and always be, yours truly, ‘The Blogger Friend”. Haha!

Special thanks to Renato for the additional photos and GIF.